Put four bodies on a stage and wait. Wait for the singularities – or lack thereof – to emerge. Important: count on dance, theatre, instinct, play and Thomas Lebrun to accept both.

Four dancers: two girls, one small and energetic, one average; two boys, one very, very tall, one very, very handsome. And four trajectories of dancers from different backgrounds. Four bodies “tels quels” (as is) which, put together, start by defining their differences. That is the working hypothesis of Thomas Lebrun’s piece for young audiences. Once they are brought together, what happens? Dance happens. And the group happens. In other words: they discover each other, grow, make room for each other or take it away, flee, refuse, aid and, perhaps, accept each other. Anything is possible, including, above all, play. This is the second time, after Histoire de pluies et de beaux temps, a choreographic tale created in 2003 in the early days of his company Illico, that Thomas Lebrun has done a piece for children. But this time, he takes the stance of a bemused and pedagogical entomologist as he develops his ode to tolerance, to self-acceptance. And while he’s at it, he shows the force of conviction of dance. Because this foursome has a twofold message: show contemporary dance to young audiences and have faith in its “distinct ability to captivate young spectators and stimulate their imagination, without letting the meaning or a childish narration take control.” The writing is raw, to convey a clear message: “Look at people as they are, show yourself as you are.” And as for norms, Thomas Lebrun knows what he’s talking about, he who wrote Itinéraire d'un danseur grassouillet (Story of a pudgy dancer) in 2009. He who came to dance late, through the back door; he who lent his not-exactly-standard shape to Bernard Glander and Daniel Larrieu at the end of the 1990s. And made of this body a virtue with burlesque possibilities, before choreography allowed him to move past that and into more serious and graphic ventures. All of that can be found in this piece. Thomas Lebrun, as is. 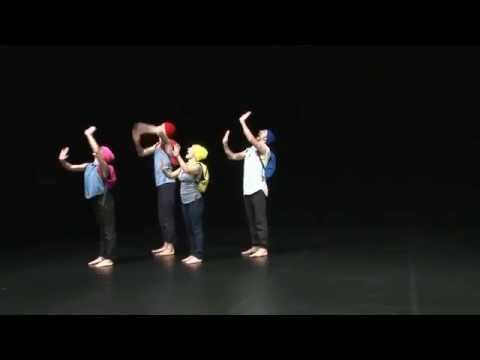