A new creation for the director of the CCN in Rillieux-la-Pape. On the programme: a physical confrontation of bodies and sound. An “artisan-body” against “low-fi” sound, an organic choreography by Yuval Pick against an electroacoustic score by the American composer, Ashley Fure.

This new piece combines two forms, yours and that of Ashley Fure, the American composer. What confrontation were you seeking?
Ashley Fure and I were trying to create an architecture of sound and movement. It’s really a piece by – and for – four hands. And that became the subject of the work. The sound of course plays a key role in the project but we absolutely wanted to avoid a technological approach. On the contrary, the shifting of the sounds is led by the dancers. Visually and manually, by using, for example, small mobile loudspeakers positioned on the stage as part of a spatial and temporal architecture. The relationship between movement and sound takes shape in a very concrete manner. We play with the alternating force of each: The presence of the bodies and that of the loudspeakers. It’s a power struggle between forces in constant friction.

What made you decide to work with Ashley Fure?
She is fascinated by the physicality of sound and works on patterns and trajectories using powerful tones that directly touch the nervous system. I love that. Her electroacoustic work treats music like layers to be superimposed and transformed. So her research seemed very close to mine. As if the highly organic quality of her textures inspired me in my work on live performance.

You build intimate ties between the choreographer’s role and that of the dancers. What avenues did you explore with them in this work?
Nothing metaphorical, in any case! I wanted to set in motion a kind of flow of movement, an uninterrupted choreographic material, with varying intensities, rhythms and directions. I worked with the dancers on a precise vocabulary of movements, not so much as a demonstration but as an act of production. It is more action than demonstration. I want the dancers to create something that goes beyond the sum of their individual persons. To achieve that, we studied in great detail the trajectories of movement in the body. I asked them to visualise these trajectories as connected to the mechanics of breathing. The movement is generated by the trunk, the torso and hips, then moves to the limbs and beyond. And vice versa. In the end, the question is not about what the dancers are doing but how they do it. These are the artisan-bodies.

Two years ago in Lyon, you took on the challenge of a large group of dancers. You said at the time that you were an ensemble choreographer. What does the group allow you to do in this piece?
Two years ago, my view of the group was above all a social view. I was interested in how the individual operates within the group. This time, my focus is very different: how a group can solicit the individual and carry him beyond himself. I want to show and make audiences feel something that touches on the living. By living I mean putting materials, movements and sounds in a given space, brought to life by the presence of bodies in real time.

You trained in dance in Tel Aviv. What made you switch to choreography?
My encounter with dance began with traditional Israeli dances, which are based mainly on pleasure and sharing. I have to admit that I had a hard time with the strict technical requirements. I think that I held onto the sharing aspect even during my years of training at the Bat-Dor Dance School. So it took me a long time to build my own vocabulary and physical landscape. I had to hone the technical aspects, the notions of body weight, working on the peripheral things and musicality, and undoing my initial training.

"This time, my focus is very different: how a group can solicit the individual and carry him beyond himself." 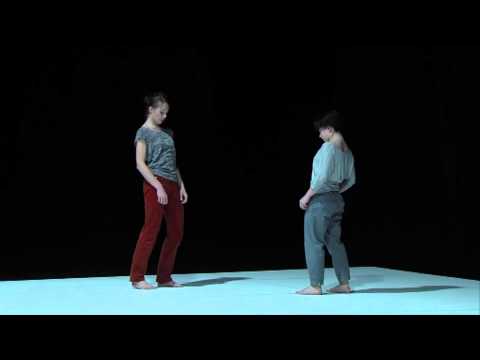