AccueilProjectDance and Performance - The TrailUNTITLED_I will be there when you die

Popular, folk and collective practices are the field in which Alessandro Sciarroni conducts his performative work. After Bavarian dances explored to the point of exhaustion in FOLK-S, he has now given a radical twist to the most classical kind of juggling: four jugglers hold a ceremony about gravity, UNTITLED_I will be there when you die.

How does juggling relate to the title?
Circus isn’t something you choose, it chooses you – and that’s especially true of juggling, which is imprinted in the DNA of the people who practise it. If you decide to make a living from it, then you look life straight in the eye and accept it for what it is. It means identifying with a label that makes you different from other people. It means fighting against imponderables, against gravity, in the knowledge that you can’t beat it. It’s something that stays with jugglers as long as they live. The title refers to all of this.

What juggling objects have you chosen for this exercise?
Clubs. To my mind, they’re the object that represents the classical juggler.

Having worked on folk dances, what has now attracted you to the world of circus? What are the circus stereotypes that you had to fight against?
When I was a child, I quickly felt a kind of indifference to traditional circus. I remember being unable to feel involved in a show where no tightrope walker plunged into the void from a height of 10 metres, or where a knife didn’t land right in the heart of the charming lady dancer. Working with the jugglers in UNTITLED has, in a sense, allowed me to overcome this drawback and acquire the tools to enjoy this kind of show. Juggling means executing: concentration, strength, consistency and fighting the force of gravity. All of this stirs my emotions, but in Italy, the collective imagination is still strongly attached to the traditional circus. Even now, people know little about the new contemporary circus.

How is this piece related to FOLK-S? How did you choose the juggling discipline?
What triggers exploration is an unexpected intuition: I might find myself in a place, attending an event, which sometimes gives me a sense of time slowing down: I find myself exactly in that place, at that precise moment. It happened for FOLK-S, when I saw a picture of a dancer in Tyrolean / Bavarian dress for the first time. And it happened last year when I went to a magic and juggling show and saw two jugglers tossing skittles into the air: at that precise moment, I said to myself that I had to explore this practice. In a sense it’s absolutely subjective, but it’s also universal. The more you manage to put your finger on something specific, and the more you photograph it in detail, the more successful you’ll be in talking about something that concerns us all. In fact, after FOLK-S and this piece about juggling, I’m going to continue exploring collective practices in sport. This will be the third part of the “will you still love me tomorrow?” trilogy.

More broadly, as someone who works in performance, which figures in this field have made an impression on you?
Picking up your pictures and notebooks is like going back to see someone whom you once knew very well but no longer frequent. Diane Arbus was an extraordinary artist, not merely a reporter. And her work has stayed with me, as if imprinted on my memory. I sometimes feel like I’m following in her footsteps, but in my own language – the language of performance, dance and theatre.
The other day, I reread an application she submitted for a grant from the Guggenheim Foundation in New York, in which she stated: “I want to photograph the considerable ceremonies of our present because we tend while living here and now to perceive only what is random and barren and formless about it. While we regret that the present is not like the past and despair of it ever becoming the future, its innumerable inscrutable habits lie in wait for their meaning.” Diane Arbus is an artist whose poetry has definitely influenced me equally in style and substance. The other reference is, and will always remain, the work I did with Lenz Rifrazioni’s company. I learned everything there. Everything.

At the Biennale, you’re also presenting JOSEPH_KIDS, a children’s adaptation of your first solo, JOSEPH, which dates from 2011.
Joseph_Kids portrays a man on his own, facing a laptop computer. As in the version for adult audiences, the performer is looking for his picture, which in turn is projected and deformed via a webcam and simple video effects. To begin with it’s a serious search, but it soon takes an ironic and surprising turn when the man enters into a virtual duel fit for a western. In fact, the purpose of this piece is to show children that you can play with technology to create things without becoming alienated.

"When I was a child, I quickly felt a kind of indifference to traditional circus. I remember being unable to feel involved in a show where a knife didn’t land right in the heart of the charming lady dancer. Working with the jugglers has allowed me to overcome this drawback and acquire the tools to enjoy this kind of show." 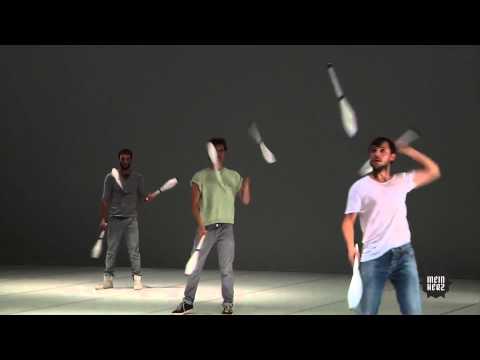