Roland Auzet and Arushi Mudgal give a lesson in enhanced performance, where we learn that “odissi”, an ancient Indian dance, can gain from the addition of Western style percussion, and vice versa.

He’s a director, percussionist, composer and also holds his own on the poetic front. Not so much a jack-of-trades as a “stage writer”, Roland Auzet has a taste for enhanced artistic gestures. Enhanced by a brilliant background in music: studies at the conservatory then at the Ircam, and lessons with the master Iannis Xenakis. Enhanced further by an extended experience with circus artists at the Fratellini Academy, specialising in cloud swing. A taste for aerial work? Auzet created quite a commotion in the musical circus world in the early 2000s, with his genius for experimentation in object theatre, in the use of space and decrepit instruments producing distant sounds. But that’s not all. We’ve seen him play arpeggio on a musical egg with the juggler Jérôme Thomas, do a staging of Christophe Tarkos’s poetry and texts by Gherasim Lica, perform with François Raffinot, give birth to a virtual creature to slip into the costume of the blue-eyed hero of The Tin Drum by Günter Grass. But always thinking in terms of music. From floor to ceiling. Basically: assembling advanced musical technologies with the circus arts and multimedia. In sum: inventing “a new performance-writing,” making “worlds and bodies vibrate more intensely.” Not so much a change in bearings as a preference for general mobilisation. With Auzet, nothing prevents a tambourine being used with electro music, or computer feats being coupled with tight-rope walking and diabolo juggling. And so nothing prevents Sama: a rhythmic conversation between European percussions and the great Arushi Mudgal, an “odissi” dancer. “Odissi”? An ancient Indian dance which evokes the world of plants and femininity. A sinuous dance, close to the ground, made of round movements and swirling bust, head and hips. Heelstomping vs. percussions, trying to find what can unite them. One form of virtuosity enriched by the other, and vice-versa. An enhanced performance? “We can try,” they say. There you have it. 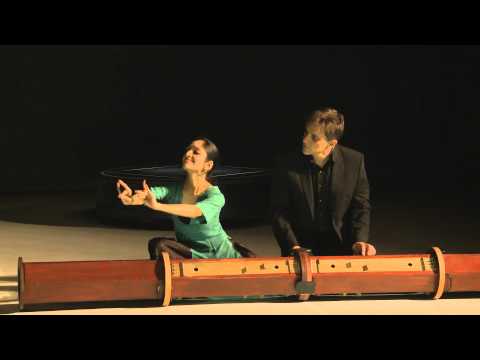