In 1994, Kader Attou staged his first piece at the Lyon Biennale. Twenty years later, he is consolidating his victories. One signature, 16 dancers, a piece crafted like a ballet, and a title – Opus 14 – that establishes order: hip hop finds its place in the repertory and at the same time in the history of dance.

Last year, in The Roots, a hip hop piece for 11 dancers, you temporarily set aside one of your principles, i.e. confronting hip hop with other forms of choreographic creation. You’ve returned to that principle in Opus 14, a new piece for 16 dancers. What does this return signify at this stage in your career?
20 years of dance, 20 years on stage, 30 years of hip hop. I looked back and I asked myself where it all got started. I saw myself at age ten, in 1984, watching TV and seeing a hip hop show that was introducing the culture in France. I wouldn’t be here if it weren’t for that.

What was its real impact?
I was first struck by the way of moving, of disjointing the parts of the body and expressing something. It was totally new and yet very familiar to break-necks like myself. And the participants in the show were young people from tough neighbourhoods. It could have been me. But mostly I remember the “dance lesson” at the end of the show, when Sidney and the dancers demonstrated and explained a movement. We tried to get the idea and would all meet up outside after the show to try to do the moves ourselves. It would go on for hours. That’s how the !rst battles got started.

Thirty years later, where does hip hop stand in France?
That’s precisely what interests me: what has become of hip hop’s codes, its gestures and techniques, how has the dance developed. In the beginning, it was a dance of protest, and a way of channelling energies that risked being scattered, which is still the case. But it’s no longer 1984, the dance has grown and matured, it has experienced other things. People predicted it wouldn’t last more than a few years but now we see it has taken hold in the national choreographic centres. Another French cultural exception!

Opus 14 has 16 dancers, all of them from hip hop, which is a particular way of occupying space. Was it important to you to reassert this?
Paradoxically, it’s not about asserting strength. On the contrary, I want to show that this raw, masculine energy, that many consider macho, can be something other than sheer performance. Hip-hop can be poetic, slow, fragile and sensual. And I try to do away with the idea of showmanship that is always associated with hip hop. I want to show above all that the dancers are artists. I’m also increasingly interested in working with groups. The underlying idea is that of ballet. With 16 dancers, you have plenty of material to work with, a certain mass. Dance allows you to explore how the individual exists in the mass. I’d say that I’m looking for a dancing humanity.

Twenty years ago, you created Athina, your first piece here at the Lyon Dance Biennale. How do you see that piece now?
We were still “kids from the hood,” but we wanted to show that our kind of dance wasn’t limited to the streets and that it was more than the TV show people were seeing at the time. The story was a bit sentimental but it brought together classic dance and hip hop. Already at age 20, I was telling myself that just because we’re not dancing the same thing doesn’t mean we can’t dance together. I was already looking to build links. The question was: how can each person find his place on the stage? In other words, how can hip hop !nd its place on the stage?

What also unites classic dance and hip hop is the idea of virtuosity. How do you address that dimension?
What I’m interested in is how that virtuosity is controlled. How emotion is created – or not – by means of virtuosity. It’s true that virtuosity makes me think of ballet. You can be a virtuoso alone, but with three, four or more dancers, it becomes a whole different matter. This is what I’m trying to create.

What does the term “ballet” mean to you?
Ballet is about ensemble work. Of course, this refers foremost to classical ballet, but that isn’t the heart of the question to me. For me, ballet is mostly the notion of a repertory.

Is there such a thing as a hip hop repertory?
Absolutely. There are a few of us working on this idea: repertory, heritage, leaving a mark, a signature. Everything that contemporary dance has done, we are trying to do with a certain number of CCNs. It’s a lot of work, gathering videos, writings and researching the notation. But it’s necessary to begin making a place for this dance in the history of all dance.

"In the beginning, hip hop was a dance of protest, and a way of channelling energies that risked being scattered, which is still the case. But it’s no longer 1984, the dance has grown and matured, it has experienced other things. Another French cultural exception!" 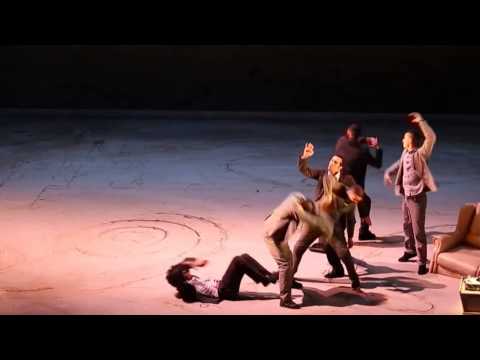