Toss three lads into an empty space, allow the aptly-named principle of anarchydemocracy to do its thing… And enjoy the burlesque confusion that ensues.

On the stage of Gerro, Minos and Him, Aloun Marchal, Roger Sala Reyner and Simon Tanguy, all bare legged, channel all of that – and a little bit more. Which is handy: “à trois”, the possibilities are even more outlandish. Their bodies can do just about anything: to begin with, shi!ing between states without warning, from one imaginary space to another, then returning suddenly to the stage, stark naked. Together, or not, but each in his own space, each in the middle, each in his own system, like the distant cousins of a Cunningham mainlining on burlesque. “This constant changing of fictional spaces is the heart of the piece. It leaves the audience confused, trying to understand where the dancer is, how he got there, and what makes him move.” The rules of the game? None apply, yet they all do. Just as long as there’s burlesque, flippancy, tension, frontality and – why not – danger. “The way we work is based partly on disputes during decision-making, which are inherent to any collaboration, and partly on the dynamic created by saying ‘yes’ to every suggestion made in the studio. It’s what we call ‘anarchy-democracy’.” On stage the trio veers between shouting, wrestling, kabuki love scenes, tribal chants, and even dance. A state of extremes. “It’s because each person is "ghting for their own interests that the collaboration has such density, and an authentic rapport can emerge.” Even if the dice are loaded, for hidden within the trio is the choreographer – a fact which, with a de! touch and small acts of cruelty, he enjoys pointing out. 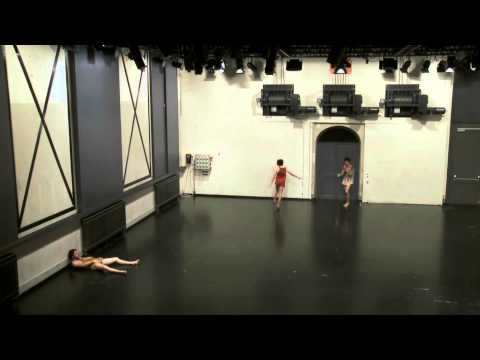 Extraits de Gerro, Minos and Him